Part of the reason that the report on our first conference took so long to come is the amount of other stuff your humble author (Jonathan Jarrett) has been doing, and no small part of this has also been to do with medieval frontiers—who’d’a thunk? And not the least of it was another conference the next month, Boundaries and Frontiers in the Middle Ages, on 4 and 5 May 2018, this one different from ours in three important respects: firstly, it was in Nottingham; secondly, it was all postgraduate papers except the keynote; thirdly, one of our speakers, Marco Panato, was here one of the organisers; and fourthly, flatteringly, they asked me to give the keynote address! 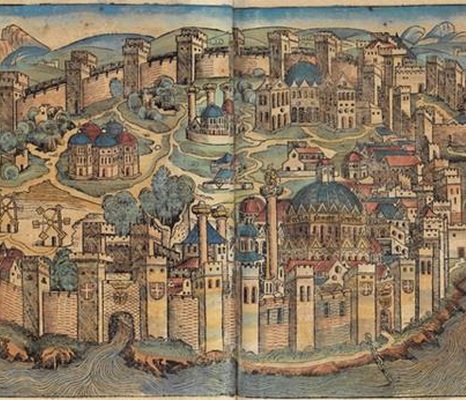 Now, this was more challenging than you might think as the keynote was scheduled at the end of the first day’s sessions. So, firstly I had to keep people awake and not too conscious that I was between them and dinner, but secondly I had to follow a whole rook of very good and clever papers and still sound impressive. Whether I did or not, only they can say, but this is what I was up against:

As this was a gathering organised by the Midlands 3 Cities Consortium, students from Nottingham and Birmingham predominated, and did their respective universities credit. (The speaker from the third city, Leicester, could not attend, which was a shame not least as I’d tried to anticipate his paper in my own…) A whole range of different periods, sources and techniques were on display, from network analysis of Bristol parish communities through trauma theory, Jewish intellectual history, canon law, medical regulations, fortress archaeology, literary criticism and good old-fashioned textual analysis, as well as some numismatics, and frontiers appeared in every case, but of so many different kinds. Where our conference had stuck fairly tightly to a geopolitical understanding of the frontier, here conceptual and ideological frontiers buzzed more loudly, and the interaction of the different papers was all the livelier for that. Perhaps not every idea bruited here had yet found its perfect home in the materials, but it was all good to think with. For my part, I gave a speech entitled ‘Local Élites and Frontier Lordship, in Medieval Iberia and Beyond’, reprising an article of mine that never came out (a story I shall some day tell in my other Internet place) but asking, essentially, when a ruler of an expanding power wants to engage a settlement or polity on their borders into their own polity, how does that work? Many of the obvious answers fail on a frontier: ideas that this ruler somehow should rule here obviously weren’t working before, so what would activate them now? The presence of an armed force is one obvious answer, but how do you make it keep working after you’ve had to take the armed men away? Consensus has to be built, but we don’t always think about how. I pursued these questions primarily using my beloved Christian-Muslim frontier in the Iberian Peninsula of the central Middle Ages, but drew comparisons with the Byzantine Caucaus of the tenth century and Mercia in the time of King Offa. I was also using this to work out some stuff I was writing at the same time about how Count Guifré the Hairy, no less, of Urgell, Cerdanya and eventually Barcelona, Girona and Osona, managed exactly this feat in the frontier Catalonia of the late ninth century. When this work comes out, it will come out in Catalan, so may not be as accessible as the reader here might wish, but I’m sure the ideas will reappear somewhere else, ideally as I rewrite that old article for a better future…

Anyway, after that there came the conference dinner, which was an odd experience for me. Not only have I never been a keynote speaker before, so never been the guest of honour in this fashion, but one of the other organisers had been an undergraduate pupil of mine, two jobs and many years ago. Thankfully they remembered me fairly kindly, but it all went together to soothe the troubled academic ego very nicely. Maybe, maybe I am doing some good in what I do…

Anyway, such matters of conscience aside, the conference was not over and resumed the next day with this running order:

Again the breadth of conception and bravery stands out, and I thought all the speakers made a good case for the frontiers in their material. The closing speaker, James Smith, the third organiser, had a challenge ahead of him to draw all of this together and did surprisingly well, eschewing the definition of ‘frontier’ or ‘boundary’ which, as he rightly said, none of us had really offered and instead drawing out some common characteristics, which are worth thinking with:

To James’s credit, those are all quite hard to argue with – not impossible, of course, but admirably tough – and I’m afraid I found this so thought-provoking that I rather hogged the following discussion. Hopefully others learnt a little from me, but I had certainly come away impressed and thoughtful and very happy to have been invited. May all such work on frontiers be as lively and free-thinking!