Having set out the origins of this project, I thought perhaps a more personalised reflection on my position in the subject could be useful, not least as I’m sure I have blind spots which perhaps you the reader can cure for me! But it seemed to me when first I thought of this project that one of the problems medievalists have is that, although it’s less fashionable than it used to be not to acknowledge any theoretical influence at all (which of course just means your theory is the set of tacit assumptions instilled in you by your education), the places we get our theory from are still not what they might be. I think this applies especially in the case of frontiers studies. 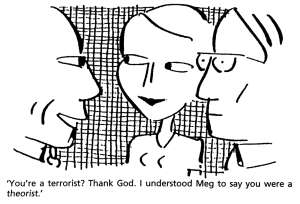 If one looks at some of the classic treatments of frontiers historiography, and there are as many of these as there are essay volumes on medieval frontiers—which is a fair few—they tend to namecheck influences from two directions.1 One is Roman history, where the debate between, to crystallise wider schools onto their most visible proponents, Edward Luttwak and Christopher Whittaker over the zonal or linear nature of the Roman frontier and whether the Roman limes was a much broader area than the fortified line that sometimes (only sometimes) demarcated it continues to rumble vaguely even now.2 The other, however, is the modern American West, which as set out in the now venerable (and, importantly, superseded even quite close to its time) work of Frederick Jackson Turner, had no line, no demarcation, was just an eternally-stretching open space ripe for the occupation. Just as that was a colonising discourse, so have medieval historiographies in which colonisation by Christians of spaces occupied by some Other was at issue grabbed on this to understand what was going on better, in effect by imposing the way that nineteenth-century pioneers and their eventual governments treated Native Americans onto the way that Reconquista soldiery and Crusaders treated the Spanish Muslims or Baltic pagans.3 Unlike Luttwak, who despite his beginnings as a Reagan defence analyst has done quite well as a historian, Turner’s thesis now lies discarded by American work on the frontier, because colonisation has just lost its fashion cachet in the modern world.4 But as a myriad of Crusader historiography shows, this insight continues to dawn afresh on generation after generation of medievalists. (Sorry, Alan, if you’re reading, but you know the people I mean…)

Meanwhile, there is lots of work about frontiers and borders going on in other disciplines. Some of this is in the other place where medieval historians have sometimes gone looking for theory, social anthropology, but here again we tend to be very far from up to date, and the seventies work on which we traditionally rely, especially Clifford Geertz, Mary Douglas or Victor Turner, not least because they themselves talked to and used work by medievalists I think, did not often touch on frontiers of the geopolitical kind; instead, we see this stuff popping up in the more literary work on border-crossing in the sense of culture-hopping or, especially, sexual transgression.5 And there we kind of stopped. There is more modern anthropological work which combines those aspects with those of state power, cultural policing and border control, most obviously the unconventional but extremely influential work of the queer Chicana poet and anthropologist Gloria Anzaldúa, but it’s rare to see such ‘borderlands’ work used in medieval history; I never have except where I was doing it.6 So that’s a trick we’re missing.

But the other thing that has increasingly dawned upon me, especially since starting in Leeds, is that in this respect we are way behind our modernist colleagues, who are drawing not just on the present world and its immediate background but on the work of political scientists as well as anthropologists (and indeed others, NGO operatives, policy-makers and so forth) working on current situations. Within weeks of arriving in post here at Leeds I found myself wandering through a conference in which I was more or less force-sold a book on China’s eighteenth-century frontier policy; within a year we had a new specialist in the Indian-Pakistan border and how it was made working with us, and another expert on the Burmese border with British India was also on staff.7 Their reference points do include some anthropologists, but mainly they include a sheaf of other modern historians whose work is powerfully synthetic, but of which medievalists are basically ignorant. I’m building up a file of this stuff I ought to read but its bulk is daunting.8 Nonetheless, if we want to be able to make a case that we have something to tell them that they couldn’t know without talking to us, something I do believe or I wouldn’t be doing this project, we do have to make an attempt to find out what it is that they think they know, huh? It’s ironic that sometimes we are readier to deal with people from other fields and decades ago than to talk to our immediate colleagues…

5. I’m thinking here especially of Saher Amer, Crossing Borders: Love Between Women in Medieval French and Arabic Literatures (Philadelphia PA 2008), which I’m assured is great but looks way more relevant to my research on a bookshelf than it does open in my hands; I was expecting something more like Simon Barton, ‘Marriage across frontiers: sexual mixing, power and identity in medieval Iberia’, Journal of Medieval Iberian Studies Vol. 3 (Abingdon 2011), pp. 1-25, DOI: 10.1080/17546559.2011.556700.

7. The book I bought was Matthew W. Mosca, From Frontier Policy to Foreign Policy: The Question of India and the Transformation of Geopolitics in Qing China (Stanford, CA: Stanford University Press, 2013). Since then we also have Elizabeth Leake, The Defiant Border: The Afghan-Pakistan Borderlands in the Era of Decolonization, 1936-65 (Cambridge 2016).

8. Three top hits, again: Paul Nugent, Smugglers, Secessionists and Loyal Citizens on the Ghana-Togo Frontier: the lie of the Borderlands since 1914 (Athens OH 2002); Willem Schendel, The Bengal Borderlands: beyond state and nation in South Asia (London 2004); Thomas M. Wilson and Hastings Dunnan (edd.), A Companion to Border Studies (Oxford 2012). Some general round-ups in Henk van Houtum, ‘The Geopolitics of Borders and Boundaries’, Geopolitics 10 (2005), pp. 672-679 and Pekka Hämäläinen and Samuel Truett, ‘On Borderlands’, Journal of American History 98 (2011), 338-361.